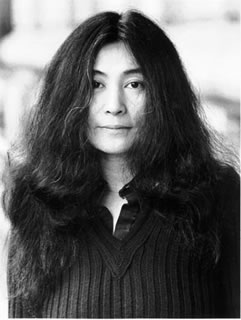 Keeper of the Lennon flame.
"I know that when I say this I may be stepping on pins and needles
But I don't like all these people slagging her for breaking up the Beatles
(don't blame it on Yokey!)
I mean, if I was John and you were Yoko I would gladly give up musical genius
Just to have you as my very own personal Venus"
— Barenaked Ladies, "Be My Yoko Ono"
Advertisement:

Yoko Ono (born February 18, 1933), is a Japanese-American artist and musician who is most widely known for her relationship with John Lennon of The Beatles. When Yoko first met John Lennon, she was an artist exhibiting in the UK. Working with artist group Fluxus throughout the 1960s, Ono was a pioneer in the burgeoning conceptual art movement which included work in sculpture, performance, filmmaking and music.

Ono collaborated with experimental luminaries such as John Cage and jazz legend Ornette Coleman. In 1961, years before meeting Lennon, she had her first major public performance in a concert at the 258-seat Carnegie Recital Hall (not the larger "Main Hall"). This concert featured radical experimental music and performances. She had a second engagement at the Carnegie Recital Hall in 1965, in which she debuted "Cut Piece

," a seminal performance within the conceptual art movement.

After John Lennon left the Beatles, the two artists collaborated on music together - working together on very different projects all underneath the umbrella of "Plastic Ono Band." Yoko collaborated together with John on his first three albums: Unfinished Music No. 1: Two Virgins (1968), Unfinished Music No. 2: Life with the Lions (1968) and Wedding Album (1969). In 1970, Yoko Ono began to release a number of solo records, which began incorporating rock and blues songs into them, as she was recording many of them in the same studios and with the same musicians that John was using. Although Yoko's work was poorly received initially, the albums have survived and aged well - proving to be part of the foundation of punk rock and new wave music.