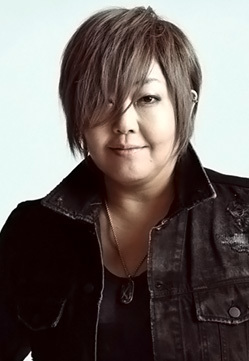 Megumi Ogata (緒方 恵美, born June 6, 1965 in Tokyo, Japan) is a stage musical actress-turn-voice actressnote Unlike most stage performers-turn-voice actors who usually gets scouted to enter the business, Ogata retooled herself and took the voice acting training school route as most voice actors would do since her stage group was disbanded very early in her stage performance career. who has a following due to her unique voice, particularly her lower coarse voice which makes her one of the more famous go-to voice actresses for Bishōnen characters, and was named the first celebrity voice actress to startup the "Cool Boy" typecast; a trend followed by ladies like Romi Park, Mitsuki Saiga and Junko Minagawa; contrasting and splitting from Rica Matsumoto's Hotblooded boys line in an era where various character typecasts set shape.note She noted her default speaking voice is on the mid-higher end just like a typical girl, but she deliberately lowered her voice to fit the role of Kurama and her typecast stuck, so throughout her career, she just goes with the flow and speak with her lower voice tone.

Ogata was famous for her roles as Shinji Ikari in Neon Genesis Evangelion, the original Haruka Tenoh / Sailor Uranus of Sailor Moon, and her debut as Kurama in YuYu Hakusho. One very notable exception is her being the very willowy and girly Princess Emeraude, though she made up for it by later portraying the very bishonen Eagle in the next season.

She wasn't very active in the anime industry for a period of time, as after happily marrying a man 14 years her junior, she focused primarily on her singing career and her marriage. However, her burst of roles from Special A, Bleach, the Danganronpa series, Assassination Classroom, and reprising her roles as Shinji, Yukito, Yue, and Kurama has pushed her back into voice-acting.

Ogata is a close friend of Shinichi Yamada, and the late Shiho Niiyama since the three of them were classmates at the same voice acting school prior to their debut. It was also revealed that Ogata has ties with "The Mother of Japanese Voice Actors", Mari Shimizu, due to Shimizu's daughter being high school classmates with Ogata.

Ogata was awarded “The Kazue Takahashi Award” note An award to recognize voice actresses for her influence through various media. at the 7th Annual Seiyuu Awards in 2012.

And if you just want the list of the works she has done, here they are: