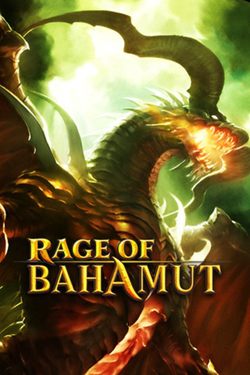 Rage of Bahamut is an online mobile CCG developed by Cygames as their first game, and published jointly by Cygames and Mobage. Originally Japan-only, it was later given a US version. Players collect cards by doing quests, prizes, opening up card packs, or trading and use them to battle other players, enhance, or evolve them. Players can also join or create a team called an "order" to participate in in-game events, which allow you to battle other orders and collect points to earn ranks and prizes.

Players and the cards are divided into three realms/factions:

An anime entitled Rage of Bahamut: Genesis began during the Fall 2014 Anime season. The plot is a Prequel to the events of the game. A sequel anime entitled Rage of Bahamut: Virgin Soul began during the Spring 2017 Anime season. A third anime, Manaria Friends (a revival of the previously-canceled 2015 spin-off title) was released in the January 2019 season.

As of February 29, 2016, the English version of the game has been shut down. In March 2022, it was announced that the game would be winding down and no new events or cards would be released. The game is still up and playable despite this.

Cygames later released another card game worldwide called ShadowVerse which uses the art from many Rage of Bahamut cards, making it a Spiritual Successor to this game.