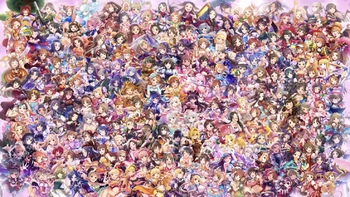 THE iDOLM@STER: Cinderella Girls is one of the four sub-brands of Bandai Namco's THE iDOLM@STER franchise besides Million Live!, SideM, and Shiny Colors, spawning three games, two Anime adaptations, countless number of Manga spin-offs, ten (7 numbered and 3 unnumbered) real-life Live Concerts, a growing number of songs, and of course, Over 190 girls to produce. note That number includes 765/876 Pro idols, though the exact number of Cinderella Girls-exclusive idols are 190.

All games of this subseries were jointly developed with Cygames (yes, that one), while all of the music releases are handled by Nippon Columbia, who publishes the mainline, non-Million Live! 765 Pro music releases as well.

The first game in the subseries, THE iDOLM@STER Cinderella Girls, first started its service on November 28, 2011 through DeNA's Mobage platform for feature phones; compatibility was extended to iOS and Android devices as a web application on December 16, 2011. In 2014 native apps for these devices were released. In addition, a Korean version was released with three exclusive idols, though service has since shut down in 2016.

When it was released it boasted over 100 idols, a cast which expanded until it reached a total of 203 idols note  Though they still advertise the game with its tagline "Over 190 idols to produce" (counting the trainer sisters, 765 Pro idols, Korean-exclusive idols, and 876 Pro idols), though of these less than half are voiced. The gameplay follows a collectible card game format in which each idol is represented as a card, which the player may use to form a unit of idols to train in lessons, take to jobs, and compete against other units.

On September 3rd 2015, a Rhythm Game spinoff called THE IDOLM@STER Cinderella Girls: Starlight Stage was released for Android and (later) iOS platforms, with gameplay similar to fellow idol rhythm games such as Love Live! School Idol Festival but using 3D models, and with five lanes as opposed to SIF.

In 2016, a virtual live simulator, THE IDOLM@STER Cinderella Girls: Viewing Revolution was released for PlayStation VR, allowing players to enjoy watching their favorite idols in a virtual live performance set in Maihama Amphitheater (the venue that was first used for the first live back in 2013).

An anime television series adaptation produced by A-1 Pictures aired in 2015. Two years later, A Cinderella Girls Theater anime adaptation aired in 2017 as part of the Spring 2017 Anime lineup, and has been renewed for four more seasons each year, totalling five seasons.

made by Orange known simply as Spin Off! was released in 2019 as part of the 8th Anniversary. A year later, just in time for Starlight Stage's 5th Anniversary, a new anime music video

for "Go Just Go!" animated by CloverWorks was released.

On the tenth and final concert, an animated adaptation of the U149 spinoff was announced.

This subseries also has quite a number of manga adaptations, be it anthologies or spin-offs; see All There in the Manual section of this page for more.

open/close all folders
In General
The Original Game
Starlight Stage