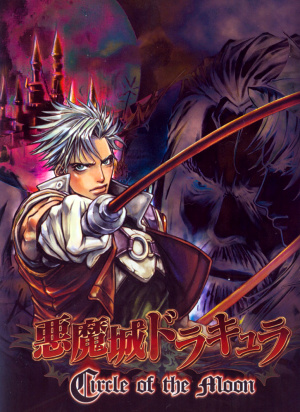 His master captured, his friend turned against him, and worst of all, a dark ceremony to power up Dracula looms on the horizon. All in a night's work for a Belmont...except he's not a Belmont.
Advertisement:

In 1830, a woman named Camilla holds a ceremony to resurrect Dracula. A trio of vampire hunters, the aging Morris Baldwin, his son and apprentice Hugh, and Hugh's fellow apprentice and rival Nathan Graves, go to her castle to stop her, but arrive too late. The reborn Dracula overcomes them all, captures Morris, and casts Hugh and Nathan into the catacombs. Lost within the castle and abandoned by Hugh, Nathan must find his way to Dracula's chamber to defeat him and save his captive master.

The second modern new-school Castlevania, following in the footsteps of Castlevania: Symphony of the Night, Circle of the Moon was the first game in the series on the Game Boy Advance, launching together with the system in 2001. It helped keep the series going after the more recent Nintendo 64 games had been critically panned.

Gameplay consists of exploring the castle in search of artifacts that will allow Nathan to overcome obstacles and push deeper inside, with the ultimate goal of confronting Dracula. Exploration and combat with enemies also yields items that will make Nathan more powerful. The most valuable are a series of tarot-like cards which allow the casting of spells. Although the plot is threadbare and predictable, it is played up for all it's worth, with major bosses that would just otherwise just be random monsters given purpose, if not exactly character.

The game caught some flak upon release for allegedly having graphics so dark and poorly-defined that it was nearly impossible to see what was going on on the screen. In fact, this was the fault of the non-backlit Game Boy Advance, for which Circle of the Moon was a launch title. Later improvements of the hardware have dispelled these criticisms, but it explains the uncharacteristically bright and colorful graphics in the later Harmony of Dissonance. Also notable was the difficulty, which was considerably higher than the games which came before and after.

As of October 2014, you can now pick up the game on the Wii U as a Virtual Console title in all regions, and as of September 2021 it is included in the multiplatform Castlevania Advance Collection.

Circle of the Moon provides examples of: