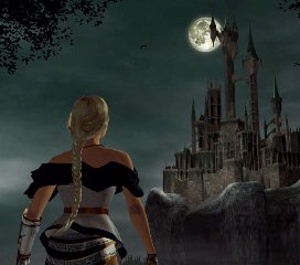 What a terrible night to be cancelled...
Castlevania: Resurrection is a canceled game in the Castlevania series for the Sega Dreamcast. The game was intended to release as a launch title for the system before delays pushed it back to 2000 and cancelled shortly after.
Advertisement:

The year is 1666. A mysterious countess attempts to resurrect Dracula by bringing him through a portal. Since there is no Belmont available to fight them, the Powers That Be pull two Belmonts from different time periods into the year 1666 to fight the forces of evil. These two are Sonia Belmont from the year 1450 (who debuted in Castlevania Legends), and Victor Belmont (a new character) from the late 1800s, who had tried to break from his family's lineage of vampire hunters.

As previously mentioned, Resurrection was canceled partway through development. It is widely believed that Konami didn't have faith in the fledgling Dreamcast and decided to jump ship, as the cancelation was announced on the same day that Sony revealed the PlayStation 2. The game became something of a myth amongst the video game community due to the known existence of a working demo, which didn't surface until 2021 and leaked on the internet. The demo is notably incomplete with missing collisions, a roll mechanic that doesn't work and broken set-pieces where obstacles are missing or don't work. At least you can still play as Sonia in a selection of levels.

Resurrection would have provided examples of: