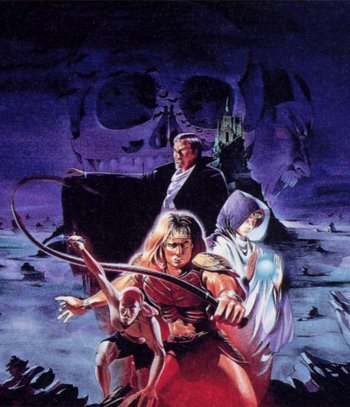 Castlevania III: Dracula's Curse (Akumajō Densetsu or "Legend of the Devil's Castle" in Japanese) is the third NES entry of the epically long Castlevania series, and a prequel to the original. This game chronicles the exploits of Trevor C. Belmont (Ralph C. Belmond in Japanese), ancestor of the original game's Simon Belmont. In 1476, Trevor, who has "a long history of fighting the forces of evil", is called forth by the citizens of Wallachia to defeat Dracula. The game chronicles his journey across the land to the titular Castlevania, and his subsequent infiltration of the castle and battle with Dracula.

Generally considered the best NES Castlevania, and rivaled only by Super Castlevania IV or Castlevania: Rondo of Blood as the best old-school Castlevania. Following the overambitious Simon's Quest, Konami took a back-to-basics approach with this game, sticking to traditional platforming while improving the graphics and music. The result plays almost identically to the original Castlevania.

Nevertheless, there were some important innovations. The path to Dracula's castle frequently branches, and the player will wind up following one of three paths to the final levels, plus an early side-route that is entirely optional. Along the way, Trevor may also pick up one of three companions: Grant DaNasty, a wall-climbing pirate; Sypha Belnades, a sorceress with elemental powers; and Alucard, Dracula's rebellious son. In addition to deepening the gameplay, the latter two would become very important in the series' Myth Arc. In contrast, Grant is rarely seen or heard of today unless in a group-cameo with the other three.

In a technical sense, this was one of the most advanced NES games ever produced. It had a unique memory mapper as well as a special chip which offloaded some of the sound processing from the console. To this day, it remains one of the most technically difficult NES games to emulate due to these factors.

The series serves as the basis for Netflix's Castlevania (2017) show, with the first and second seasons revolving around the plot shown in this game.