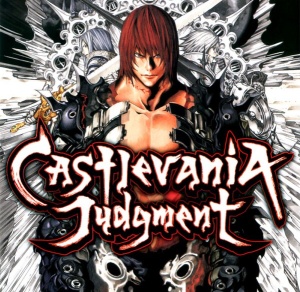 "This castle is rotten, and the vampires who are making it rot deserve to die. Someone has to do it, so why not me?"
"Right on time. Welcome to the time rift."
Advertisement:

Castlevania: Judgment is widely considered the oddball in the Castlevania series. Released in 2008, it was announced as exactly what it was: a 3D Castlevania fighting game.

Calling on noted manga artist Takeshi Obata (of Hikaru no Go and Death Note fame) to do the artwork, the game boasts a cast of thirteen familiar faces from the entirety of the Castlevania series in addition to a new game-specific character, justified with an Excuse Plot about pulling people from various time periods to battle a future menace who sought to change history. Long-time bosses Dracula, Death and Carmilla were playable for the first time ever. (Well, Dracula is debatable...) Battles take place in 3D arenas with their share of obstacles, as well as breakable objects containing items that could be used in addition to each character's natural abilities.