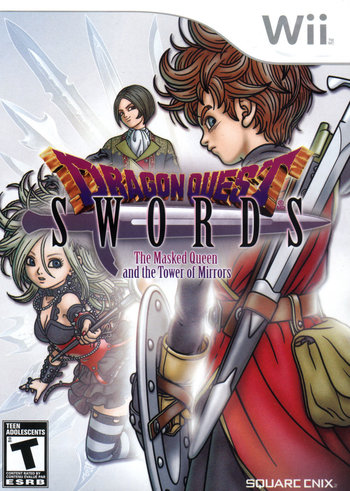 Dragon Quest Swords: The Masked Queen and the Tower of Mirrors is a first-person RPG developed by Eighting in cooperation with Genius Sonority and released by Square Enix on the Nintendo Wii in 2007. It tells the story of the son of the great swordsman Claymore, who is prepared to take his place among the knights of Avalonia by undergoing the "Walk of the Worthy", a rite of passage for sixteen-year-old males. After he completes his trial, the young swordsman learns of an Evil Overlord that his father fought in the past, and of a reclusive queen who wears a creepy mask and has been largely avoiding the public eye. How are these events related, if at all?

The game is notable for taking advantage of the Wii's motion sensor controls; you swing your sword by swinging the Wiimote in the same manner.