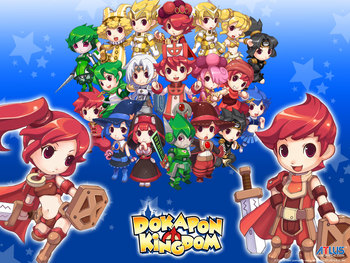 The sixth game in the Dokapon series, Dokapon Kingdom is a turn-based RPG/board game hybrid developed by Sting Entertainment and released for the PlayStation 2 and Nintendo Wii, with an English localization released by Atlus USA for the PS2 the same year and on the Wii in 2010. It is a Video Game Remake of the second Super Famicom game, Dokapon 3-2-1, and thus features a similar structure and Excuse Plot while significantly overhauling the gameplay to its modern incarnation.

Like most other Dokapon games, the goal of the game is to win the rights to rule the titular Dokapon Kingdom (and Princess Penny's hand in marriage, potentially) by getting rich enough to out-value your companions/competitors. How do you do that exactly? Work your way across the continents beating the everloving crap out of any monster who dares stand in your way, with any town and castle you rescue being added to your total value. Given that this is Dokapon, you're also actively encouraged to beat up, cheat, steal from, and all-in-all backstab your "companions" to gain an advantage and fight tooth-and-nail to come out on top. There's also something about a dark overlord trying to conquer Dokapon, but who cares when you can get abducted by aliens and beat up adorable rabbits for fun and profit?

"What do ya wanna trope?"