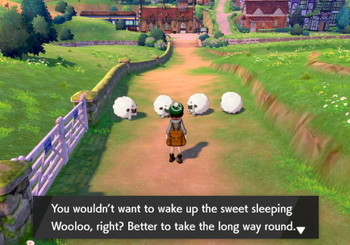 Don't try to walk through those gaps either. Your footsteps will wake them up.
I'm Mr. King Dice, I'm the gamest in the land
I never play nice, I'm the Devil's right hand man
I can't let you pass 'cause you ain't done everything
Bring me those contracts, come on, bring 'em to the king
"Die House", Cuphead
Advertisement:

A Non-Player Character that prevents the Player Character from passing through a certain door or passage, effectively blocking it off. This means that the player will have to accomplish some task to gain access. The question of why the protagonist can't simply force the NPC to move is rarely brought up. In some cases, an option for attempting to evade or even fight the NPC does exist, but results in a Non Standard Game Over (such as getting arrested and thrown in jail). In cases where you could choose to fight the NPC, you can guarantee it is a Hopeless Boss Fight, even when it's implausible for the specific NPC.

A Sub-Trope of Broken Bridge. A favorite tactic of the City Guards. See also Insurmountable Waist-Height Fence. Can lead to a Chain of Deals. Compare and contrast Beef Gate, where the character will simply kill you instead of just stopping you, until you can kill it. Cash Gate is a specific sub-trope.