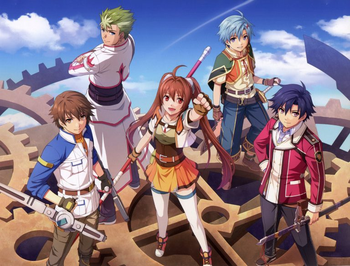 The protagonists of the series, so far. From left to right: Lloyd Bannings, Kevin Graham, Estelle Bright, Nayuta Herschel, and Rean Schwarzer. Not pictured: <C> and Van Arkride.
Advertisement:

The Trails series, known in Japan as the Kiseki series, is a series of turn-based JRPGs developed by Nihon Falcom. The series is the latest entry in their The Legend of Heroes franchise, and by far the most successful. Building on concepts developed earlier in the Gagharv Trilogy, the Trails series is a sprawling epic taking place on the continent of Zemuria. Despite being a sub-series in its own right, the series itself is actually divided into several arcs; each arc spans multiple games and takes place in a different country on the continent.

The first arc of the series, Trails in the Sky, begins in the year 1202 of the Septian Calendar. It starts in the tiny Kingdom of Liberl, but later arcs take place in different countries across the continent, brilliantly weaving together purely internal concerns, international politics, military disputes, the legacy of the ancient civilizations, and those who seek out the relics of the past for their own purposes...

Thousands of years ago, Aidios, The Goddess of the Sky, gave humanity the Sept-Terrion, seven sacred treasures which granted dominion over the land, the sea and the skies. About twelve hundred years prior to Trails in the Sky, the cataclysm known as the Great Collapse brought about the end of the ancient Zemurian civilization. The Sept-Terrion were lost and a dark age descended upon the continent. Five hundred years later, the Septian Church brought back the worship of Aidios and restored peace to the continent. Then, just fifty years before Trails in the Sky, Professor C. Epstein made a breakthrough in his study of artifacts from the ancient Zemurian civilization, ushering in a rapid wave of industrialization known as the Orbal Revolution.

As the games all take place within the same general timeframe, characters from one arc will frequently appear as cameos and recurring characters in later arcs, and while each arc focuses on a new group of heroes, their storylines all connect to the same plot thread that runs throughout the series. This leads to a countless number of Continuity Nods and Call Backs, and for later games in the series, they can be hard to get into if you aren't caught up. With music composed by Falcom Sound Team jdk, and an incredibly detailed narrative focusing on the characters and the world they live in, the series can truly be described as 'epic'. The series has also inspired a spin-off game and an Intercontinuity Crossover with Falcom's other Flagship Franchise, Ys.

Every game in the series in Japan follows the [X] no Kiseki pattern, where Kiseki is a word meaning Trail(s), Track(s), Path(s), Trajectory, and/or Locus. It is also a homonym for 'Miracle', and thus every single title can (intentionally) be heard as "Miracle in/of [X]".

The series has also seen localizations in English thanks to XSEED Games, and later, (as of the localization of Cold Steel III), NIS America.

Here is a chronological list of all the games in the series.

Spin-Offs and Other Games

Tropes applying to the series as a whole can be found on this page. Tropes involving the characters can be found in the story arcs where they first appear or are most prominent. Because of the degree to which the games are interconnected, spoilers abound so be careful which ones you highlight.

Not to be confused with the Tales of... Series.

Tropes common to the entire series include:

Example of:
Something About a Rose