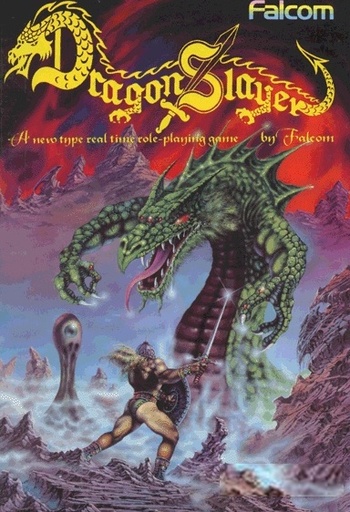 Dragon Slayer may look archaic to modern players, but back in 1984, when it was first released on the NEC PC-8801, many players must have agreed with the intro screen which proclaimed it to be "a new type... unlike any other game you have played on your computer." For this, Dragon Slayer was one of the very first Action RPGs (and one of the first RPGs period beating Dragon Quest to market by two years), and it set the precedent for many future games in the genre by Falcom and other companies.

The concept of role-playing in Dragon Slayer is quite rudimentary: there are no NPCs, and the player character appears to be a generic adventure hero. The game consists of tile-based levels called "phases." In each phase you start out at your house, wandering around trying to find first a sword, then coins, potions to increase magical power and various useful items which can only be carried one at a time. You can gain experience from fighting the endless waves of increasing tougher monsters, which eventually lets you use spells and move diagonally but does not make you stronger in combat. What does increase your strength is finding orbs by unlocking chests and bringing them home one at a time. The objective of each phase is to kill the dragon's three heads and recover the four crowns it guards.

Ports of Dragon Slayer were made for various systems, with many of the monsters redrawn as entirely different creatures. The MSX version was produced by Square in their pre-Final Fantasy years. The Game Boy version was made by Epoch (who had earlier ported it to their ill-fated Super Cassette Vision console); this version was the first to feature smooth (but painfully slow) scrolling, and was followed on the same platform by a Gaiden Game produced without Falcom's involvement. Finally, a Video Game Remake for the Sega Saturn appeared in the Falcom Classics collection, featuring substantially improved graphics and music and considerably lowered difficulty.

Dragon Slayer was the start of a long series of games. Most of these were Non Linear Sequels, bearing as little relation to each other as they did to the original, and many of these games had sequels of their own and later remakes which dropped "Dragon Slayer" from their titles. Therefore, here is a list of all subsequent Falcom games that carried the Dragon Slayer name:

Not to be confused with the 1981 movie Dragonslayer, nor with The Legend of the Legendary Heroes.