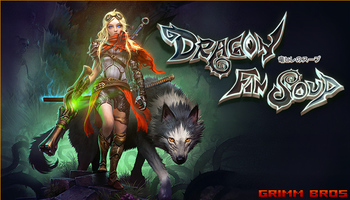 The touching story of an alcoholic bounty hunter and her pet assault wolf.
Advertisement:

One of its distinguishing characteristics among other RogueLikes is that the game features a story mode alongside the more traditional Survival and Endless Labyrinth modes.

It features turn-based and tile-based tactical combat, but tends to encourage a faster and more action oriented style of play, winding up feeling part Action RPG and part Real-Time with Pause.

The story mode stars Red Robin, a Bounty Hunter and raging alcoholic plagued with nightmares. She starts off doing odd jobs for the local bartender and other folk, and winds up learning more about her nightmares than she bargained for.

The game itself features lots of the things that make roguelikes so addictive and fun: Procedural Generation, random loot, tons of Item Crafting, and lots of things to discover. Oh, and guns. All this with a charming art style and sense of humor, to boot.