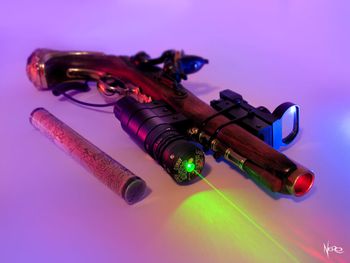 A Tactical Flintlock.
"Those're guns! Whoever heard of guns in a samurai flick!!?"
— A movie director, Astro Boy, "The Invisible Giant" note  Apparently he has never seen Yojimbo or The Seven Samurai, or read a history book.
Advertisement:

The setting and timeline may seem at first to be The Middle Ages, The Colonial Period, or some Fantasy Counterpart Culture thereof, but when you look closer, you find polyester, robots, or other high-tech toys in between the horse-drawn wagons and wattle-and-daub buildings. There's generally no rhyme or reason for which technologies are anachronistically present besides the Rule of Cool. Sometimes these may be leftovers from a lost technological civilization, or perhaps it could be that science developed along a different path than ours, allowing for more advanced technology in one field, while stagnating in others, but most of the time there is no explanation whatsoever for the bizarre mix of medieval and futuristic.

Schizo Tech is a key component of Punk Punk. It's also the foundation for Fantasy Gun Control. Compare Decade Dissonance for when one side has all the cool toys. When a story nominally set in a real-life historical period has this problem, you've got yourself some tasty Anachronism Stew. It may be because an isolated branch of mankind created an Advanced Ancient Acropolis. After the End is normally a good justification of this; often resulting in Scavenger World, especially when you have a faction with Low Culture, High Tech.

When evaluating a candidate for this trope, try not to confuse anachronisms with non-western-isms. For example, a kimono can be just as modern as a three-piece suit, if not more so. Likewise, do not confuse anachronism for cosmetic purposes with anachronism of technological capability. For example, though you will see lots of Zeppelins from Another World at work in Schizo Tech, Airships themselves are not more or less advanced than airplanes or helicopters, just suited to different situations—namely, ones that value endurance, payload and fuel efficiency over speed and maneuverability. Alternatively, a judge wearing an eighteenth century robe and wig while judging cybercrime cases is not schizo tech, but simply a remnant of the Good Old Ways. And again, Tropes Are Still Not Bad. It's also worth noting that in the alternate history of a candidate, the culture and style may simply be different, so while their older architecture may seem to jar with their higher levels of technology, it may be that that style of architecture is just "in" at that time. In dealing with other cultures, also remember that the concept of Technology Levels is flawed, and that real societies are not obliged to all invent the same things in the same order, and may miss some inventions entirely.

Most comic book universes have this trope as a natural consequence: the wondrous science held by the heroes and villains would, if even partially distributed, violate the surprisingly mundane world that divides the superhero genre from outright Speculative Fiction. Examples and subversions are noted below.

This trope has frequently been Truth in Television depending on the circumstances, with historical works involving World War I and other major events that were technological 'kitchen sink' like affairs (with cavalry charges co-existing with airplane bombing runs) one hundred percent qualifying. Beware: Many sci-fi settings that aren't harder than diamond can become this constantly if you think about it too hard.

Compare Adventure-Friendly World, Anachronism Stew, Culture Chop Suey, and Fantasy Kitchen Sink. Technology Levels is what this trope averts. As well as Medieval European Fantasy, of course. If the old stuff proves as effective as the new stuff, you've also got an Archaic Weapon for an Advanced Age. It may also be the byproduct of a Retro Universe. Contrast Days of Future Past. Not to be confused with tech used by schizophrenics.

Concept of a Hot Air Balloon

Concept of a Hot Air Balloon