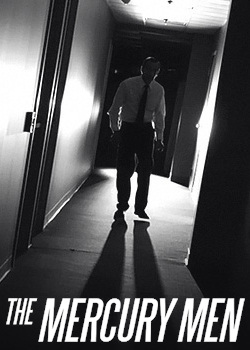 The Mercury Men is an indie sci-fi web serial, syndicated on Syfy's website in 2011. Filmed in black and white, it combines elements of Dieselpunk, Raygun Gothic and atomic punk, with a feel reminiscent of The Outer Limits (1963).

Edward Borman, a lowly government office drone, finds himself trapped when the deadly Mercury Men seize his office building as a staging ground for their nefarious plot. Aided by a daring aerospace engineer from a mysterious organization known as The League, Edward must stop the invaders and their doomsday device, the Gravity Engine.

The Mercury Men provides examples of: