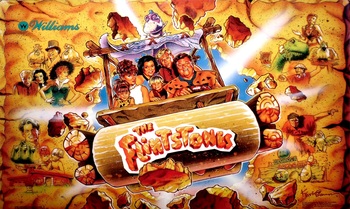 The Flintstones is a Licensed Pinball Table designed by John Trudeau and illustrated by Kevin O'Connor. It was released by Williams Electronics in the summer of 1994, a month after the live-action movie starring John Goodman and Rick Moranis.

The game combines key events from the film with additional animated antics from the prehistoric town of Bedrock. Make Fred's Bronto-Crane spit out various awards, find a job for Barney, then Go Bowling at the Bowl-O-Rama. Use the Smart Ramps to loop pinballs around the flippers for the 1-2-3 Combo, visit Joe's Diner and the Bedrock Water Buffalo Lodge, and make Fred's Choice for a chance at the Mystery Award. Build up more Machine Time to power up the Rock Cutter, then help Fred invent Concrete and collect both the Jackpot and Super Jackpot awards. This is all accompanied with numerous animated displays and original dialog from Goodman, Moranis, and Harvey Korman.

Players tend to be very divided over The Flintstones. Critics dislike the game for its not-too-challenging difficulty, jackpot-heavy scoring, and the use of live-action movie art instead of the animated cartoon's (never mind that it was supposed to be a tie-in for the movie). On the other hand, fans enjoy it for being a forgiving game with a family-friendly license, mixed with some very clever features and challenging shots that further extend and refine ideas from John Trudeau's earlier tables.