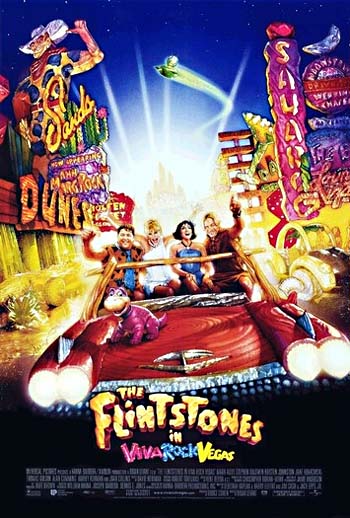 The Flintstones in Viva Rock Vegas is the second Live-Action Adaptation of The Flintstones franchise with Brian Levant returning to the director's chair. This Prequel to the first film tells how Fred Flintstone (Mark Addy) and Barney Rubble (Stephen Baldwin) meet Wilma Slaghoople (Kristen Johnston) and Betty O'Shale (Jane Krakowski), respectively. The film outlines how both couples fell in love and the rivalries from others that complicated their relationships. Joining in is the mysterious little alien the Great Gazoo (Alan Cumming) who has been sent to Earth to experience humanity's "mating rituals"—though only Fred and Barney can see him. Nothing will stand in the way of love— except for arrogant and conniving playboy Chip Rockefeller (Thomas Gibson), who has made it in the cutthroat town of Rock Vegas and wants to marry Wilma only for her family's fortune to pay off his debts and keep his wealth.

Despite slightly more positive reception than the first film (though still generally negative), this film had the misfortune of coming out during a time when Hanna-Barbera cartoons had become So Last Season, and Universal Pictures was already exhausting their advertising expenditures toward two of their other films released that same period, U571 and Gladiator. As a result of being put on their self-made blockbuster death row, Viva Rock Vegas tanked at the box office, grossing far less than its predecessor, and Universal relinquished the Hanna-Barbera film licensenote though they would keep it until production wrapped up for Josie and the Pussycats, which later bombed as well, resulting in no further live-action Flintstones movies being made since then, though an animated film currently is in development by Warner Animation Group.