Pinball / Creature from the Black Lagoon 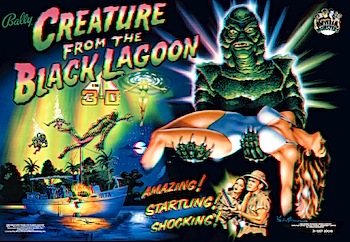 In 3D!
"Thank you, enjoy the film."
Advertisement:

Creature from the Black Lagoon is a 1992 pinball game designed by John Trudeau and released by Williams Electronics (under the Bally label). The name's a bit misleading, though; while it is named after the film of the same name, this game's setting is that of a 1950s-era Drive-In Theater. Save for the 3D decal in the middle of the table and main multi-ball mode, there's virtually nothing to do with the movie itself.

Taking place in 1954, this game has you and your girlfriend head out to the Starlight Drive-In Theater to watch Creature from the Black Lagoon. While waiting for the film to start, you try to get food from the snackbar, play on the local playground, and steal a kiss from your girlfriend. You also have to deal with peeping toms and large vehicles that block your view.

During multiball, which takes place within the film itself, the goal is to try to rescue Kay from the Creature.

Digital versions of this table are available for Williams Pinball Classics by Encore Inc. and Pinball FX 3 by Zen Studios. A digital version was also available for The Pinball Arcade until FarSight Studios' license to all Bally and Williams tables expired on July 1, 2018.