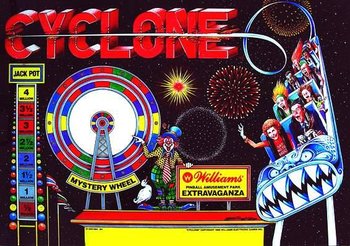 Ride the Cyclone!
Barker: "You, sir! And you, madam! Hurry, hurry! Step right up!"
Advertisement:

Cyclone is a Physical Pinball Table designed by Barry Oursler and illustrated by Python Anghelo. It was released by Williams Electronics in 1988, and is the second game in their "rollercoaster" series (after Comet).

Once again, this game takes players for a day at the Amusement Park for an assortment of fun and thrills. Ride the Shuttle Train into the park, knock down the ducks at the Shooting Gallery, then get to the Ball Toss and knock down the cats. For more fun, push your way into the Spook-House and spin the Mystery Wheel on the backglass, then pop out through the Boomerang. There's a Ferris Wheel if you need a break, but the park's main attractions are the twin coasters — ride the Cyclone three times for the Jackpot, then jump on Comet five times for a million points.

As with Comet, Cyclone is a relatively simple table, without any multiball or deep rules, though its objectives are somewhat more complex than its predecessor. It became one of Williams' top-ten bestselling tables, and is still praised by players for its fun, lighthearted, and challenging gameplay, particularly the Cyclone ramp shot. Players who are asked to rank the tables in the series often consider this the best of the three.

A sequel, Hurricane, was released three years later. Has no relation to Whirlwind.

A digital version was available for The Pinball Arcade before their license to all Williams/Bally tables expired on July 1, 2018.

Barker: "We have a winner!"