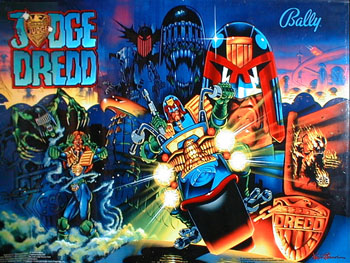 You Be The Judge!
"Judge Dredd: Pinball with an Attitude!"
—Marketing slogan
Advertisement:

Judge Dredd is a licensed pinball machine based on the popular 2000 AD comic book character. Designed by John Trudeau, it was released by Williams Electronics under the Bally label in 1993.

In the year 2116, crime and chaos runs rampant through Mega-City One. The dips and the gumps are preying on the chumps, the heisters and joy poppers are shooting up the streets, and it's up to the player as Judge Dredd to rein in the drokkbuckets and keep the civos in line. But being a slab jock isn't just busting perps and fighting off trogs — there are suspects to shadow, crime scenes to clear, and runaway battle tanks to obliterate. Whip around the playfield on the Mega-City Super Highway, attack the Sniper Tower and hit the Subway, but watch out for Deadworld, because that's where the Dark Judges are waiting...

In addition to playing regular pinball, Judge Dredd is notable for featuring "Supergame" — for an extra credit, players would get an expanded set of rules, additional two-ball multiball modes, and a chance for a 100 million point shot. Unsurprisingly, this pinball table was popular in Europe, but less so North America. For squeamish audiences, option controls allow operators to tone down the more graphic elements.

In 1998, Pin-Ball Games Ltd. released Judge Dredd Pinball, a pinball video game for MS-DOS computers. Although promoted as an "arcade-perfect simulation", it was instead an original table redressed with the Dredd license. Although it offered respectable graphics and sound, the game itself is a forgettable pinball title with a sketchy physics engine.

A digital version of Judge Dredd was available in FarSight Studios' The Pinball Arcade until their license to all Williams and Bally tables expired on July 1, 2018.

Dredd: "Your driving days are over, punk!"