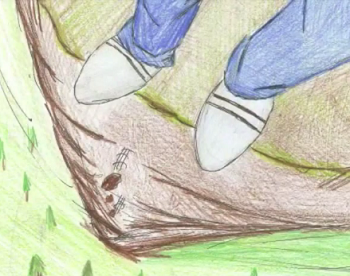 A character is standing on or near a ledge, or possibly hanging on it for dear life. An inconsequential object falls, and the camera moves into position to show it falling hundreds of feet. This is used to emphasize just how high the hero is, and how horrifying his fate will be if he isn't saved quickly. It's also the perfect time for somebody to reveal they're secretly afraid of heights. Or not.

This often happens when the hero uses his feet or free hand in an attempt to regrip or otherwise gain leverage, but the force he creates causes a rock or a part of a cliff to break off. Other times, an item on the character's person will fall, such as a wallet or cell phone. If it's the Damsel in Distress, then her high heels are also likely to be lost this way (Particularly if she has a lot of running to do in subsequent scenes).

Sometimes, we will see the object merely splash in the water or disappear into the abyss. If it hits solid ground, however, we'll likely see it break into a million tiny pieces.

Can also easily provide a wide variety of Drama Preserving Handicaps if the lost object isn't inconsequential, e.g. something like the hero's gun. We watch it fall not only to indicate that a fall means certain death, but also to show that, even if he gets to the top, he'll have to tackle the villain without whatever he just lost. (We all know that after the unarmed struggle the villain's going to fall, don't we?)

The alternate title should not be confused with Luke, I Am Your Father, for a more figurative interpretation of the phrase.

Wile E. Coyote fails to catch the Road Runner during his refrigerator-skiing attempt, and we get a bird's-eye view of his fall into the canyon.

Wile E. Coyote fails to catch the Road Runner during his refrigerator-skiing attempt, and we get a bird's-eye view of his fall into the canyon.