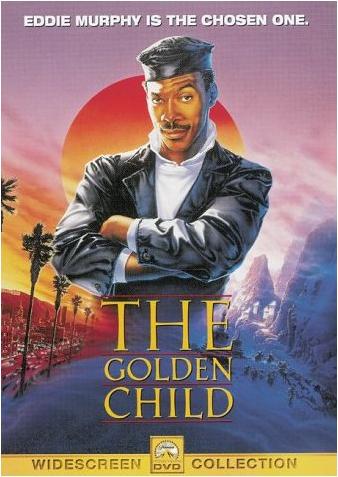 The Golden Child is an Urban Fantasy film released in 1986, starring Eddie Murphy, Charles Dance, Charlotte Lewis, Victor Wong, and JL Reate as the titular Golden Child and co-produced by Industrial Light & Magic. It is a tongue-in-cheek take on the entire genre of Chosen One stories, complete with a Trickster Mentor, Card-Carrying Villain, and the lovable Karmic Trickster antics of Murphy.

Chandler Jarrell (Murphy) is a private detective specializing in missing children who is recruited by Kee Nang (Lewis) to come to Tibet to locate and rescue the Golden Child, a boy with mystic powers who has been kidnapped by demonic forces. The Big Bad, a sorcerer named Sardo Numspa (Dance), wishes to kill the child to bring about the rule of evil on Earth, but must do so at a specific time with a specific ritual. Jarrell, a cynic and skeptic, is forced to come to terms with the supernatural elements of the world, as he is the Chosen One who is fated to protect the child. First, however, he must undergo his own training at the hands of "The Old Man", a Trickster Mentor played by Victor Wong, and recover the Ajanti dagger that is the only hope of killing Numspa... or the Golden Child.