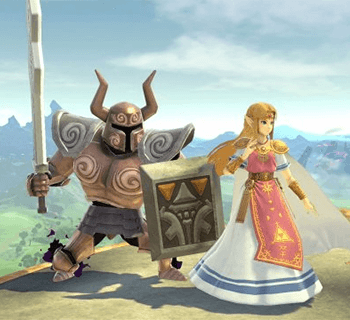 He's not cowering behind her! She's just that badass. (Besides, he's just about to rush forward.)
A specific type of a two-character ensemble, where one is bright and personable but not necessarily good at taking care of themselves, while the other is "dark" in some way (traumatized, broken, or just gloomy and cynical) but supremely competent and fiercely devoted to (protecting) the other. In a case of Opposites Attract, the Liege may be attracted to the Defender's suffering, and may in turn serve as the latter's Living Emotional Crutch or even a Morality Pet.
Advertisement: