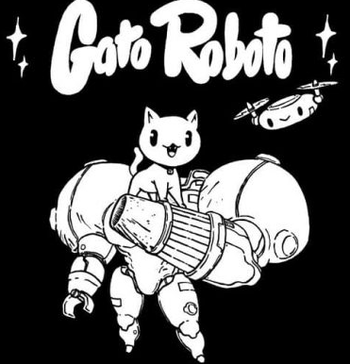 Gato Roboto is a Retraux Metroidvania game, developed by Doinksoft, published by Devolver Digital and released on May 30th, 2019 for PC and Nintendo Switch.
Advertisement:

Its story begins with a space captain, Gary, receiving a distress call from a facility on a remote planet. He speeds there pronto, and is just about to land the craft...when his cat, Kiki, accidentally steps on the controls, and causes a hard landing, which leaves him trapped in his seat. Undeterred, he sends out Kiki to at least scout out the area. By chance, she stumbles on a mech suit that perfectly fits her, and that's when the real fun begins...