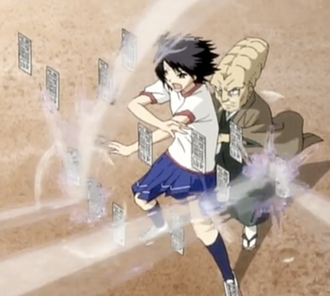 She came close to Dorothy and kissed her gently on the forehead. Where her lips touched the girl they left a round shining mark, as Dorothy found out soon after.
— The Wonderful Wizard of Oz, Chapter II: The Council With The Munchkins
Advertisement:

To say heroes face trials, enemies, and dangers that imperil their lives with alarming frequency is putting it mildly. Some heroes are hunted even before birth by proactive villains, and regardless of the tendency of such efforts to backfire it behooves the forces of good to take steps to protect the hero. One of the more popular ones (along with hiding them at birth in a common family) is to use a Protective Charm on them.

This can be a spell or Artifact of Power that acts as a form of Supernatural Aid that keeps the character safe. It might render them hard to find, naturally harm or repel attackers, or cause Glamour Failure on whoever is using supernatural disguises. Of course, an un-harmable protagonist is too close to being an Invincible Hero, so the charm likely has limitations either in the wording, the method, range, or another part of the protection. One popular limit is it stops working on a Dangerous 16th Birthday. Likewise, it may not protect allies or actively defeat villains, either.

Worst of all, though, is when their enemy twists the charm against them or even No Sells it. Of course, wily villains may just trick the hero into giving it to them or someone else.

Often White Magic. Compare Kryptonite-Proof Suit. If worn, may be a Magical Accessory.