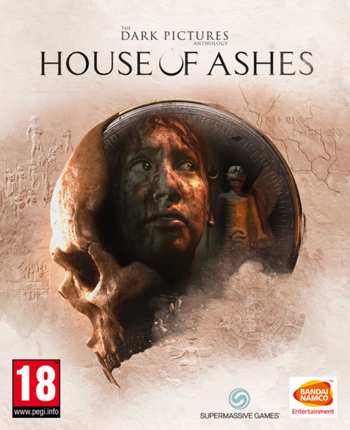 "In Sumerian myth, they say the souls of the dead dwell deep underground in the House of Ashes. Where they lived on dust, plagued by the demons of the underworld."
— Salim
Advertisement:

Set in May 2003 as the first phase of the U.S. invasion of Iraq draws to a close, CIA field operative Rachel King joins an elite military unit on a raid of a suspected underground chemical weapons facility in the shadow of the Zagros Mountains. Once King and her unit arrive at the coordinates, they're ambushed by a local patrol led by Sergeant Salim Othman. An earthquake opens sinkholes in the ground during their ensuing firefight and both sides of the fight are tossed into the ruins of a buried Sumerian temple. In the darkness beneath the Mesopotamian Desert, something evil is awakened, and ancient, unstoppable creatures begin their hunt.

This game is a follow up of the game Little Hope, that came out in 2020.

It is to be followed by the next game The Devil In Me.