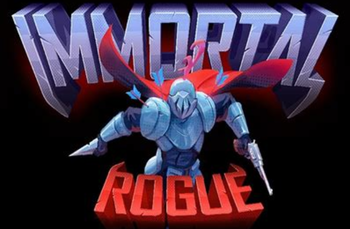 Immortal Rogue is a top-down Hack and Slash Roguelike game for IOS and Android, developed by Kyle Barrett and released on February 20th, 2019.
Advertisement:

It is premised on the idea of a vampire who is effectively immortal, with death simply forcing them into slumber for a 100 years, after which they wake up to feed again. This means that every level of the game is a whole new century, with the corresponding advancements seen amongst your opponents...or not.

After all, each time you awaken you get to choose which of that period's prominent people's to feast on. Many of those would have driven humanity to advance further if they survived, so letting them live results in more technologically advanced timelines, whereas trying to sow as much chaos as possible keeps humanity down. Meanwhile, Dracula is always out there, and you are driven, above all, by the goal of taking him down and claiming your rightful place as the king of vampires.