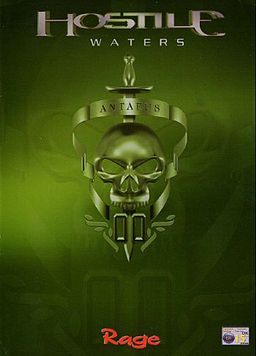 "Twenty years ago this was the scene of the last war on Earth. This Pacific island is where the future was built. Where the old guard, the fossilized establishment was brought down. Twenty years have been spent building a new Earth. A world of plenty, and peace. But the old guard never went away. The remaining monsters of the 20th century, the death-lovers, the power brokers, the old men who lived on theft and hate, have formed a Cabal, with the intent to break the world apart. With new machinery, unimagined by the outside world, they have incorporated the island into a newly grown chicane of similar islands, the Earth literally forced by machines to throw islands up into an artificial design. The Cabal control their operations from the shielded island in the center of the chicane. Operations for war against a world that's given war up. It's up to the new society of two thousand and thirty two to relearn war. To revive the last of the Adaptive Cruisers. Give it the ability to lend battle vehicles autonomous controls by bonding their systems with the chip-contained minds of dead soldiers; and to send them all into the chicane to fight their way through to Island Zero... and the nightmare, waiting there to be set loose upon the planet. These are Hostile Waters..."
— Opening Narration, performed by Tom Baker
Advertisement:

Okay, so that pretty much clarifies the premise of this particular Real-Time Strategy game written by Warren Ellis. There are, however, a few things that must be made clear:

The game can be bought from Green Man Gaming.

It is also available on GOG.com,

re-released after being pulled out of its catalog for quite a while. And it's now on Steam.