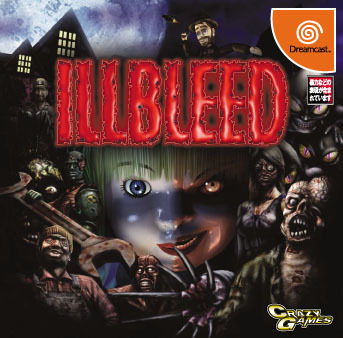 Time to get ill!
"You'll vomit with excitement! You'll puke with pleasure! You'll shit with fear!"
— Advertisement for Illbleed
Advertisement:

Illbleed is a tongue-in-cheek Survival Horror game for the Sega Dreamcast from 2001 that parodies American horror B-movies. It follows a group of horror movie aficionados (borderline Emotionless Girl Eriko Christy, wannabe psychic Michel Waters, average Joe Kevin Kertsman, and dim-witted Boisterous Bruiser and slasher-movie fan Randy Fairbanks) who receive guest passes to Illbleed, a horror amusement park built by reclusive movie director Michael Reynolds, who has filled his park with six terrifying attractions based on his movies, and promised to give one hundred million dollars to anyone who makes it through all six attractions without chickening out. Kevin, Michel, and Randy are gung-ho, but Eriko smells Hype Backlash in the making and opts out... until her friends fail to come back from their trip to Illbleed, and she's forced to investigate...

Players control Eriko as she travels through the six attractions trying to rescue her friends, facing foes ranging from the horrifying (like the vengeful, flamethrower-toting Gale Banballow in "Homerun of Death") to the ridiculous (the "Cake from Hell" in "Killer Department Store"). Each of the six stages is laden with traps that can harm Eriko, release monsters, or will just attempt to scare her to death. Fortunately, you have a special "horror monitor" that allows you to detect and tag traps (though use of the horror monitor is limited by your character's "adrenaline" level).