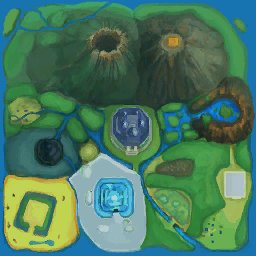 Yes, that is a desert on the same latitude as the frozen tundra.
"I've always said, the best thing about dwelling in the desert caves is the easy access to the lush rainforest."
— Mike Nelson, Rifftrax of Battlefield Earth
Advertisement:

In the real world, the landscape is determined by a complex combination of climate and geography. Deserts, for instance, are usually created by cold ocean currents along their shoreline, with the cold preventing water from evaporating and forming rainclouds. Tundra has to be at the right temperature to remain frozen, which means being either at high altitude or high latitude. Rivers have to source their water from higher terrain (from rain running off mountain slopes and collecting in vast basins). Swamps are generally located in flat-lying areas where the water collects rather than rapidly draining away.

Not so in the world of fictional geography, where you can have a vast jungle next to a desert with nothing separating them and no reason why the two should have different geological features aside from an invisible line. You'll also have swamps on mountain tops and caves full of ice slightly below a sunny surface.

Particularly notable in video games, which often try to pack in a variety of environments in a relatively small space. In older games in particular, a simple Palette Swap will turn green grass into yellow sand, white snow, blue water, or red lava without a hitch. Also tends to happen to maps of Magical Lands. Which somewhat makes sense — everything's possible with enough magic, let alone divine intervention. May be excused by Gameplay and Story Segregation; a game with 12 levels that are all grasslands would be boring. In addition, may be Hand Waved by saying that the game is not to scale with the world it's depicting; that invisible line between the jungle and the desert in the game may be described as several miles of mixed terrain in the tie-in novel.

All that being said, climate can do some weird things in Real Life. As mentioned above, the factors influencing the climate of a particular place are highly complex. Something that should (or shouldn't) happen based on one factor may be cancelled out by one or more other factors which are also present - or even due to phenomena originating hundreds or even thousands of miles away! See the Real Life section below for details.

Something of an extreme opposite form of the Single-Biome Planet. See also Hailfire Peaks, where the different climates are smushed together into a single area. Also note that the sea is typically off to one side and the whole thing fits into a neat square (like any good quilt should). The colder regions are also often located north of the map, and the warmer regions to the south.

For when it's justified by some force randomly or deliberately slotting regions together to create one of these, see Patchwork World.