Overworld Not to Scale 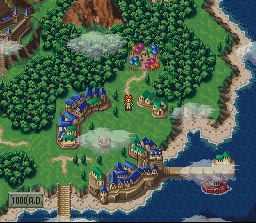 Despite appearances, Crono is not the size of a house.
A traversable representation of a Video Game's region at large, or 'overworld', slightly abstracted and depicted at a much smaller scale than the other areas of the game, so that the player can travel between distant areas faster than they could if it were all depicted "to scale". That distant town that's said to be 100 miles up yonder mountain range? You'll get there in just a few minutes of walking by map.
Advertisement:

Largely an RPG trope, made famous by Eastern-style RPG's like Dragon Quest and Final Fantasy where (especially in the days of tile-and-sprite based 2D graphics) the party character(s) were always rendered the same onscreen size, regardless of the overworld map's actual scale.

Like other areas in the game, the player is free to travel pretty much anywhere on this map they have access to, with Chokepoint Geography being the only (or at least primary) thing to prevent them from potential Sequence Breaking (no, you can't walk around that plot-important town to reach the mountain range behind it). Also like other areas of the game, expect to be ambushed by Random Encounters as you travel across it. For the sake of convenience, most of these maps ultimately 'wrap around' in all four directions; that is, if you can travel indefinitely in the same direction, you'll end up looping back to where you started.

Don't expect to find many scripted events or NPC's to interact with, or places to shop (or rest and heal) directly on the overworld map — this world map exists for Travelling at the Speed of Plot between point A and B, nothing more. So if you know you're about to embark on a long, cross-continent trip, better stock up (and save your game) before you leave town. On the other hand, many RPG's will allow you to save your game anywhere on this map, where you'd otherwise have to find a specific Save Point to do the job.

Note that despite its small scale, traveling between two very distant destinations can still take awhile (mostly due to aforementioned Random Encounters) — one of the reasons you can look forward to getting your hands on a Warp Whistle or Global Airship.

If the game reveals that there is a second world (dark or otherwise) or time period with its own map, see Alternate World Map.

Compare The Overworld proper which is more detailed and closer to scale, and Point-and-Click Map, which is abstracted even more, and you basically just click on the destination you wish to enter. For even one more step in the abstract direction (popular with non-RPG games) to the point that the map is essentially cosmetic trimming, see "Risk"-Style Map.

Tangentially related to Units Not to Scale, which is more of a Strategy Game trope than RPG. See also Thriving Ghost Town.

Not to be confused with the Fantasy World Map often included in works of literature set in a Constructed World.