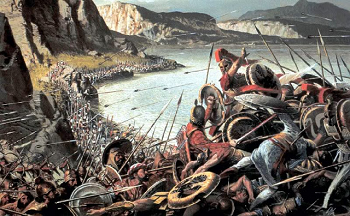 The hero's journey is a long, winding road, fraught with dangerous monster battles, maybe a princess to save, and the inevitable dungeon. Many game designers (mainly console RPGs) have a story to tell, which involves you and your party going from Town A to Dungeon B to see NPC C, and occasionally going back to Town A to stock up on supplies for the next encounter.

With that principle in mind, the world map will be designed in such a way that one or more dungeons will lead to parts inaccessible by travel on foot. You may have to bypass a Beef Gate at the end by defeating it in a Boss Battle, at which point you can travel freely through the dungeon at your leisure (provided you can still handle the monsters that lurk within). The Bonus Dungeon is almost always exempt from this trope, since those are often placed in far out-of-reach locations, presumably to dissuade newbie adventurers from getting themselves killed after wiping their feet on the welcome mat.

Somewhat Truth in Television, in that geography sometimes conspires to put up natural traffic barriers that can only be conveniently bypassed at a few locations (mountain passes being the classic example), and that as a result people tend to put up border guard posts, fortresses, and other types of traffic control points on them to keep out unwelcome visitors.

Compare Convenient Questing and Insurmountable Waist-Height Fence. Can be circumvented completely once you Get on the Boat or acquire a Global Airship.