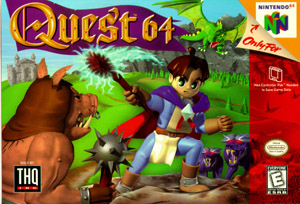 One of the earliest 3D RPGs, made for the infamously RPG-dry Nintendo 64, Quest 64 was developed by Imagineer and released in 1998 in western countries and a year later in Japan. It was remade near identically in Japan as Eltale Monsters, which was ported to PAL regions under the name Holy Magic Century. A remake for Game Boy Color, titled Quest: Brian's Journey, was released in early 2000.

The quest in question concerns the disappearance of Brian (the hero)'s father from their mage monastery as he investigates the theft of a magic book that will probably bring about the end of the world if it falls into the wrong hands. It's up to you to find the hero's father and the book to stop the world from falling into eternal darkness.

As an early RPG of its generation, Quest 64 is often criticized for its lack of depth. The plot is generic and shallow, advancement is straightforward, there are no puzzles, mini-games, party system, equipment or even money, and there's no real replay value other than going through the game again. Additionally, the game saved to controller pak [the 64's memory card] when many other games on the console saved to the cartridge, and this is despite the game's aforementioned simplicity.

At the same time, the game is noted for its unique battle system which, while turn-based, gives the player a field of movement to move about each turn to handle a fight as best seen fit. Enemies may react differently if the player is near or far, escaping always works when the player leaves the battle area, and the player can avoid some attacks by simply getting out of the way. It also has a somewhat unusual advancement system—hit points and magic points increase over time as the hero takes damage or casts spells. Brian's stats increase the same way, with Defense increasing from damage and Agility (which covers both passive dodging and how far he can move in combat) from dodging attacks or just plain walking around.

And lastly, the hero is adorable.