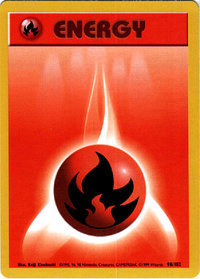 In fictionland, Water Is Blue, Wind is (sometimes) Green, and Fire Is Red.

This trope is fairly omnipresent in cultural thought. Red is the colour of fire and even the Sun in most eastern Asian cultures, and has had associations with fire in the western world for several millennia. When elements are colour coded, who gets Red? Fire. What colour do fire-powered characters wear? Red.

In Real Life, actual fire is rarely red at all. Most normal flames are either orange or gold with a white center; to get actual red fire, you have to use specific substances. This is why the fire scene when Sam defeats the Samurai in Brazil was quite hard to make, as pure red fire is really hard to generate without filtering. The reason why fire is associated with red may be due to the natural tendency to see red as a warm colour (when it is actually the lowest energy region of the visible spectrum; accordingly, blue fire is much hotter), as well as the fact that embers tend to be red. Another possible explanation is the fact that orange's identity as an individual colour is very recent, and thus older works might use "red" as a placeholder.

As a consequence of this, some works subvert this trope by associating fire with other colours, namely orange or gold. This subversion is Older Than Dirt; ancient Indian traditions used the colour yellow for the Manipura, the fire chakra, while red was reserved for the Muladhara, the earth chakra.

This is also a likely reason why Lava is Boiling Kool-Aid.

A Sub-Trope of Color-Coded Elements. A Sister Trope to Red Is Heroic. Contrast Blue Means Cold.