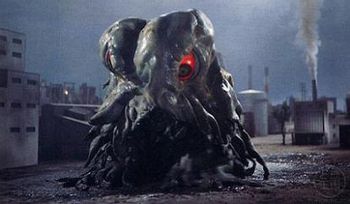 And remember, this thing is your fault.
Filthy brown acid rain
Pouring down like egg chow mein
All that's foul, all that's stained
Breeding in my toxic brain
— FernGully: The Last Rainforest, "Toxic Love"
Advertisement:

You can smell it from a mile away.

A big, horrific pile of glop. Perhaps it's made of toxic sludge from a Corrupt Corporate Executive's industrial plant, or perhaps it's merely a colossal pile of dung.

The Muck Monster is a living embodiment of filth and slop, and the Green Aesop tends to be his stomping grounds. Nothing tends to hammer an anti-pollution message home like an colossal, animate pile of (sometimes literal) crap. Plants die from this beastie's approach; sometimes animals and even people bite the dust from being in mere proximity to this abomination.

Compare Blob Monster, which is more transparent and tends to keep itself in one defined and consistent mass rather than constantly oozing and leaving parts of itself in its wake, (and is generally less smelly), and Talking Poo. See also Toxic Waste Can Do Anything, where the toxin creates a monster without being sentient itself.

A variant of the trope overlaps with Swamp Monster, creating a creature of living vegetation and/or mud (usually emphasizing the vegetation); this variant is often called a muck monster, but lacks the typical association with pollution and toxicity. They instead tend to have physical powers based on their inhuman bodily composition, such as Super Strength, Super Toughness and a Healing Factor, elemental plant-manipulating powers, or both.