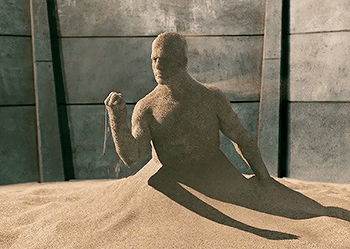 "You won't like me. I'm coarse, rough, and irritating...and I get everywhere!"
Advertisement:

Fictional creatures will often reflect the biome they live in, sometimes even be composed of the main element of said biome. Frozen Slippy Slidey Ice Worlds will often have Snowlems or more rarely sentient Sizable Snowflakes, forests will have Planimals, and so on. How would it translate to Shifting Sand Lands? Sand creatures!

Most often, the sand golem will have a definite form that just happens to be made out of and living into sand. But in very rare cases, most notably in the Stephen King novel Beachworld, the vast Shifting Sand Land itself will be sentient.