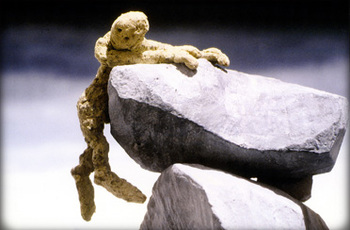 Quest is a 1996 animated short film directed by Tyron Montgomery.

It opens with a shot of a desert, with some brown clumps of sand visible next to an empty bottle. The clumps of sand move and reveal themselves to be a sandman, lying face down in the desert. The sandman starts scrabbling at the sand, and suddenly he falls through the sand, only to find himself in a different world, this one made of paper. It becomes apparent that the sandman is looking for water, as he goes after a puddle of water he finds in this paper world, only to fall through the paper and find himself in a world of stone. The sandman finds himself falling into world after world, as he continues on a desperate quest for the water he needs to maintain cohesion as a sandman.

Compare The Sand Castle, another award-winning animated short about an odd sandman creature.