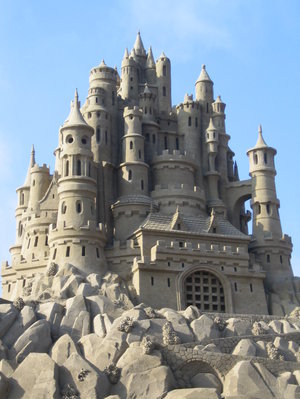 Its only fear: the rising tide.
Advertisement:

Be it on a beach or in a sandbox, be it a sculpted "castle" or a simple hill with holes in it, most of us have probably made something out of sand at least once in our lives. However, we're pretty willing to bet that said castle probably didn't extend above your knees.

Fictional sandcastles, however, don't have pesky things like drying out or the loose structural integrity of sand to worry about, so they are often the size of actual castles — or at least small cottages. If they're not simply for show, people may often go inside them and actually hang out inside the sandcastle with total disregard for the risk of it simply collapsing on top of them: people tend to forget that sand is heavy and ending up buried beneath the remains of a giant sandcastle would most certainly suffocate them...

In video games, these castles often pop up in Palm Tree Panic. In other media, they tend to show up during a Beach Episode. Compare to Ice Palace for another kind of castle built out of unlikely material.