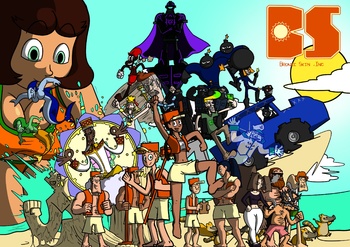 entire cast up to chapter 10
Advertisement:

Bronze Skin Inc. is a webcomic of humor nonsense about the routine of the eponymous company. When suddenly around the world several women grow to a gigantic size, they immediately become a danger to people of normal size. In the city of Rio de Janeiro, a company makes a truce with them by offering the best tan possible, this is Bronze Skin .Inc.

The plot begins 3 years later, accompanying our two protagonists, newcomers Dante and Julia, discovering the adventures that this company provides them, as well as evident Fanservice.This is the first work of the Brazilian author Pedro Barreto, started in July 2019, and a every month, a new chapter is available, being currently in chapter 32 (or the Thirty third chapter, including the pilot).Tapas