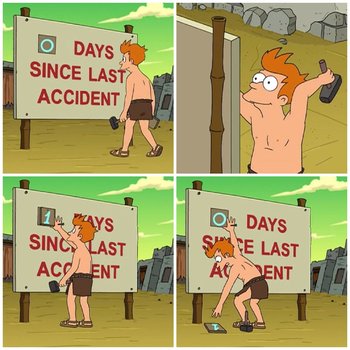 "To ensure that sufficient power remains for core testing protocols, all safety devices have been disabled. The Enrichment Center respects your right to have questions or concerns about this policy."
— PA System, Portal 2
Advertisement:

Some locations in TV land are far, far more dangerous than their real-life counterparts. The chances of a violent death are high, for major and minor characters alike. Often Lampshaded by an X Days Since sign when played for comedy.