Heart Beats out of Chest 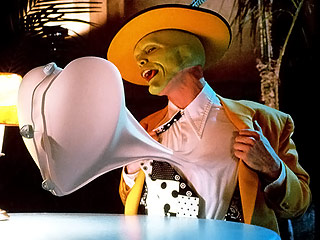 Ba-boomp, ba-boomp, ba-boomp...
A character's heart will beat so strongly that it makes a bulge in their thoracic wall, visible even through clothing. Usually, it seems as though the heart has powered completely beyond the breastbone and ribs. This is a shorthand indicator that the character has seen a gorgeous Love Interest and is completely smitten (for this reason, this trope can be seen as a more-or-less G-rated take on the Something Else Also Rises trope. Lots of Tex Avery and Bob Clampett cartoons — and modern animated shorts inspired by them — have done this). This haywire heart effect can also occur when the character experiences heart-pounding terror or extreme exhaustion.
Advertisement:

Since this effect cannot occur in living people and still allow them to survive, it appears almost exclusively in cartoons, or as an animated special effect on a live actor.

Compare with Cardiovascular Love, when heart-shaped symbols appear on or near a character and Cartoon Throbbing, when another body part of a character pulsates. This is also a kind of Impact Silhouette, but extruded instead of engraved.

Not to be confused with Beat Still, My Heart, when the heart beats literally outside of the chest.