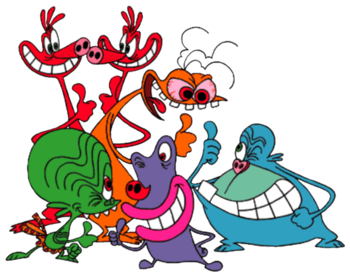 Not exactly intelligent life forms.note Clockwise from top left: Stereo, Bud, Gorgious, Etno, and Candy.
"Five little monsters were ridin' through space
Their spaceship broke and they fell into this place
They've gotta get out but they don't know how
So they're waitin' and waitin' in a creepy, creepy house..."
— Iggy Pop, "Monster Men"
Advertisement:

Space Goofs (Les Zinzins de l'espace in French, and originally Home to Rent in Britain) is a French animated series produced by Gaumont Film Company, Gunther-Waul Productions and Xilam for France 3 that first aired in 1997.

It tells the story of five aliens; the intelligent Etno, couch potato Bud, clean freak Candy, gluttonous Gorgious, and two-headed Stereo, who have crashed on Earth and have taken residence in the attic of an old house. Their main tasks are to chase away anybody who takes residence in the old house and try to get back home.

Most might remember this played on Fox Kids during the late 90's; as such, it was part of the first batch of programming seen on the newly-formed Fox Family Channel. The show's main theme was written and performed by Iggy Pop, of all people.

The series was renewed for a second season that premiered on May 20, 2005, and it also aired on Nicktoons in the UK under the show's official English title in November of that year. Stereo was also Put on a Bus in this season (save for two episodes), and their existence was retconned. The show ended with 104 episodes on May 12, 2006.

based on the series was released in 2000.

Poor old Stereo he ain't sure just what he knows
Etno is intelligent he's quite a super-head
Gorgious is a great big guy but he's fat from too much pie
Bud is cool of course it's true but he's a TV fool
...
Candy is the sweetest one cleans and cooks and acts like Mom
Feedback

The main flaw in Etno's plan was letting Bud be anywhere near the control panel.

Example of:
What Does This Button Do?

The main flaw in Etno's plan was letting Bud be anywhere near the control panel.