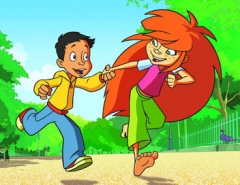 Tupu (a.k.a. Toupou, 2004-2005) is a French/Canadian animated series by Xilam about a girl who lives in Central Park. She is friends with the Mayor's son, Norton Gordon, and has a pet squirrel, Whatsup. She is constantly chased by the park caretaker, Shoobz, who lives with his mom.