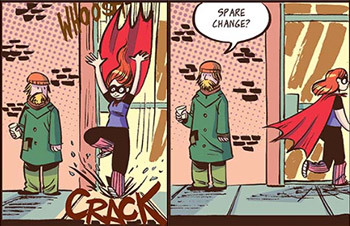 "In fact, mostly they just swerved and looked irritated, as if they had to deal with a lot of ratty teenagers carrying old hippie women across the freeway."
— Percy Jackson, The Heroes of Olympus: The Son of Neptune

An Unusually Uninteresting Sight is something that is blatantly unusual, yet nobody seems to take notice of it. It could be an odd costume, Unusual Ears, an external monologue, a visible weapon, or an animal that only vaguely resembles a normal one (such as a blue wolf wearing armor). For some reason, none of the bystanders take notice or comment on it.

In some cases this is justified with not being seen by mortals or for some reason, if it's a kid's show/book/comic/other, it's often stated that the weirdness cannot be seen by adults or doubters.

While unusual hair or eye colors won't be noticed, they may not actually be there in the first place — see Hair Colors. When the Unusually Uninteresting Sight is ignored by apathetic folks in a metropolis, then that's City of Weirdos. The simplest explanation is that people may have simply gotten used to the sight and accept it as normal.

Possibly an extension of the Bystander Syndrome, contrast with Mundane Made Awesome and Faux Horrific. Occasionally justified with a Weirdness Censor. Common in Magic Realism and Mundane Fantastic. See also City of Weirdos, Fantastically Indifferent, Elephant in the Living Room, Lions and Tigers and Humans... Oh, My!, Metallicar Syndrome and Not Distracted by the Sexy.

"And with the race about to start, there's the Doofenshmirtz Evil Incorporated Blimp!"

"And with the race about to start, there's the Doofenshmirtz Evil Incorporated Blimp!"