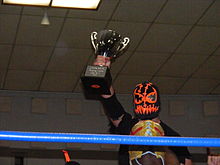 Frightmare is an American Professional Wrestler who competes primarily for CHIKARA. He made his on-screen debut in the corner of Incoherence (Hallowicked and Delirious) at CHIKARA Armdrags to Riches, November 16, 2008, and his in-ring debut for the promotion on December 12th at Face with a View, where he lost to Brodie Lee in three minutes. He would go on to capture the CHIKARA Young Lions Cup and has also competed for WSU (a joint show with New Jersey's National Wrestling Superstars and the 2011 King and Queen of the Ring tag team tournament), for Dragon Gate USA and many other promotions. In 2009, The Wrestling Observer Newsletter named him "Rookie of the Year."

He has nothing to do with any other uses of "Frightmare."