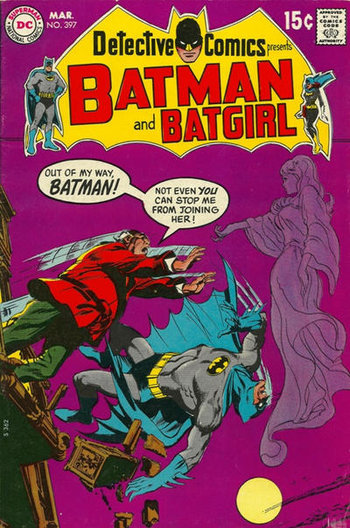 Maybe the protagonist is nearing their lowest mental ebb, maybe it's his turn to hold the Idiot Ball, or maybe things are going just a little too well. Suddenly, they're confronted by the person they last expected to see: a friend or loved one who logic dictates should be very far away right now or — just to underscore how unlikely this sudden reappearance is — dead. It's clear to the audience that the vision is some sort of trap and that he isn't really Back from the Dead, but the character for whatever reason refuses to connect the dots.

This "visitation," however, is not about to stick around and explain itself, lest its masquerade be uncovered. It might urge the protagonist to follow them with a siren song or a cryptic comment, but whatever happens, it'll turn on its heel and flee. The protagonist, overwhelmed with curiosity and emotion, abandons any sense of self-preservation and tears after it ... right into the kind of trouble that they'd have seen coming a mile away if they were thinking clearly.

An alternative variant occurs when the visitation is someone that the protagonist may not know personally; a lost child, a beautiful woman or whatever is needed to push the protagonist's buttons and have them hurtle into danger.

Contrast with Spirit Advisor, both in helpfulness and in duration. Often uses a woman in an Ethereal White Dress or similarly mysterious figure to really grab the target's attention. A common way to weed out the guy who's Too Dumb to Live. Can overlap with Virtual Reality Interrogation, when the vision is used to make a person reveal a secret.