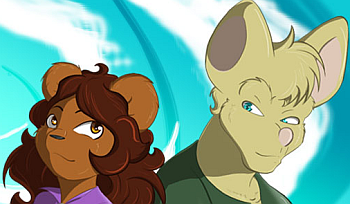 A bear sorceress, a warrior rat, and one hell of a journey.
Advertisement:

Occurring in the fictional world of Herrah, it is the story of Evon Allure, an ursine sorceress on the run from her former guardian/teacher (and the shadowy group of sorcerers he's a member of). Evon hires an adventurer named Herodotus Dent to help her retrieve an important personal item from the very school she'd just run away from. Along the way, Evon discovers a few secrets about herself and her parents' deaths and sets out on a quest to learn the whole truth, with Hero (who has a few secrets of his own) now serving as her bodyguard.