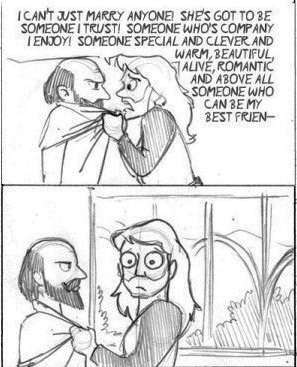 He just described his best friend, Clover.
Odette: I see him smiling and my knees start buckling. I see inside him and my doubts… are gone.
Derek: She started out as such an ugly duckling, and somehow suddenly became a swan.
Odette: So happy to be here…
Derek: Til now I never knew…
Both: …it is you I've been dreaming of.
— The Swan Princess giving us a two-for-one deal
Advertisement:

Now this doesn't necessarily lead to a relationship. In fact, it can even be when the object of affection is with someone else. If not, this can be a way to add a new dynamic to Will They or Won't They?. This is especially the case in Belligerent Sexual Tension because the realization will amp up the tension.

Sometimes occurs when the character analyzes his own tendency to the Green-Eyed Monster, or his protective impluses, or even tendency to feed this person.

They Do and Last-Minute Hookup are the natural extensions of this.

Compare/Contrast Love at First Sight. Not to be confused with having an epiphany while making love.