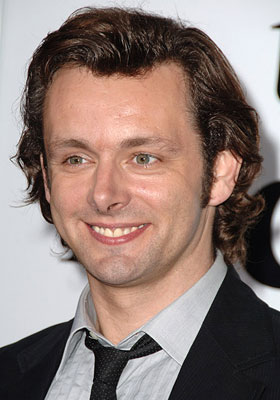 "Acting itself is quite scary. Some people say that actors are show-offs, very egotistical and all that kind of stuff, but it is quite scary."
Advertisement:

Sheen has appeared in films and on stage, was named GQ's Actor of the Year in 2009, and has received an OBE in recognition of his work. He has had very notable success playing real-life figures such as Tony Blair (three times!), David Frost, Kenneth Williams, Brian Clough, Robbie Ross and William Masters.

He starred as Dr. William Masters in Masters of Sex, and has also appeared in Underworld and Twilight. Versatile. In 2019 he played the angel Aziraphale in Good Omens.

"Sheen" is his real name, and no, he is not related to Martin or Charlie. (Or even Emilio Estevez.) He was in a relationship with Kate Beckinsale, by whom he has a daughter (and with whom he remains Amicable Exes), from 1995–2003, and with Rachel McAdams from 2010–13. From 2014–17 he dated comedian Sarah Silverman, who liked to refer to him as "Mr. Fancy Pants Sheen". In 2019 he had a daughter with partner Anna Lundberg, and in 2020 they appeared together in Staged.

Michael Sheen has appeared in the following works: